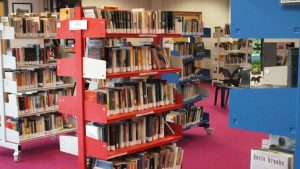 Our library, in the capable hands of Mrs Rita Shannon, is a wonderful resource for the students and teachers.

Assisted by a team of TY students, Mrs Shannon keeps the books up-to-date and in good condition and every student in the Grammar School has a free library ticket assigned to them – they need only call up and collect it.

The Library is open every lunchtime and all students are welcome to use it. Many students find it a calm and peaceful retreat from the noise and action of the locker areas.

In 2019  the library was gifted comfy and cheerful new chairs generously given by the Sligo Grammar School Alumni. Ideal for a relaxing read! 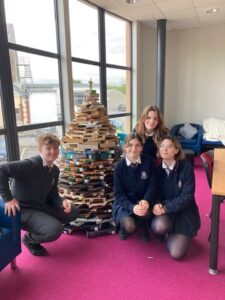 Everything, Everything by Nicola Yoon

‘Everything, Everything’ is a young adult novel written by Nicola Yoon. The novel, which is Yoon’s first book, follows eighteen-year-old Maddy Whittier, who suffers from an illness so severe that she must stay indoors at all times, being treated by her mother, Doctor Pauline Whittier. Her life remains quite plain and bleak until one day, a family moves in next door, and their intriguing son named Olly catches Maddy’s eye. As the pair get to know each other over e-mail and Maddy begins to fall for Olly, she starts to become curious of life beyond the bubble in which she has lived her whole life.

I thoroughly enjoyed this book from start to finish. The plot kept me hooked with its recurring themes of suspense and anticipation, and the book as a whole contains several unexpected twists. I also feel that the way in which the author describes the restricted world that Maddy is forced to live in encourages the reader to become more appreciative of the little things in life. In addition to this, I think that ‘Everything, Everything’ would be a good book to read right now given the recent COVID-19 lockdown as many of us will likely relate to Maddy’s character more.

If you enjoy romance, drama, or just any novel that is easy to read yet you still feel as though you have taken something valuable from it, I highly recommend this book. I feel as though it is a fantastic and thoroughly enjoyable read. This book has some mature themes, so I recommend it for teenagers aged 14 and older.

“Frankly in Love” by David Yoon – A book review by Anushka Pathak :

If you know me, then you know how much I LOVE this book. This book is my all-time favourite, I can’t even count the amount times I’ve read and re-read it. I go back to it whenever I’m in need of a pick-me-up, or when I want to cry. “Frankly in Love” is a YA coming of age novel that follows the exploits of Frank Li, a self-described “Limbo”. Frank uses this term to describe other Korean-American kids that are stuck between their parent’s expectations for them, and their own American upbringing. His parents have a rule of thumb when it comes to romance; Frank must only date Korean. This proves to be a bit of a problem when he falls for Brit Means, who is absolutely lovely – and white. His fellow Limbo Joy Song is in a similar predicament, so they decide to pretend to date each other in order to gain freedom from the restraints of their parents‘ expectations. On a surface level, “Frankly in Love” is just another fake-dating story, but really, it’s so much more than that. It’s a story about cultural expectations and identity, family and how complicated love can be. I think a lot of first-generation immigrants do struggle with being “Limbos”, myself included, so I really loved the discussion of cultural identity and expectations in this book. “Frankly in Love” also discusses racism in a really intelligent and clear way, which I really appreciated. Throughout the course of the book, Frank also develops as a character. The very first chapter of the book begins when Frank begins his senior year of high school, and the last chapter ends during his first term at university, so we see Frank develop and mature as a person. It is a coming of age novel, after all. The characters were also really awesome! They were all very fleshed out, and seemed like real people, in the sense that sometimes I really wanted to kick Frank for the way he was treating other people, but I digress.  The writing style was very interesting, it was pretty unique, but still enjoyable. Of course, the romance was very well done as well! I really enjoyed reading this book, and I don’t think I could recommend it enough! Of course, as with everything, there were some flaws, but as a whole I think it was a really incredible book, and I’d give it a 10/10 rating! I would recommend it to people that like coming of age novels, and romance novels, and I think it’s best for 15-18 year olds.

Book review of the Hunger Games

Preview of the story

Sometime in the future, a 16-year-old girl named Katniss Everdeen lives with her little sister and mother in North America in a place called District 12. People in District 12 are poor, and since her father’s death in a coal-mining accident, Katniss has had to hunt game with a bow and arrow to supplement her family’s meagre supplies. District 12 is far from the Capitol city, Panem, a place Katniss never expects to visit. But then comes the day of “reaping,” when her beloved sister Prim is randomly chosen to represent District 12 in the annual Hunger Games. Immediately Katniss steps forward and volunteers to take her sister’s place in the Games, which are held each year in the Capitol. The Hunger Games have elements in common with the Olympics (coaches, training and a spectacular opening ceremony) and with reality TV shows (constant cameras, obstacles, a manipulated environment in the arena). But the purpose of these games is far more gruesome and terrifying. Of the 24 young people who compete, only one will survive. To win at the Hunger Games you must kill all your opponents, even if they have become your friends.

Suzanne Collins notes that the roots of her book date back to an early fascination with the myth of Theseus, when as punishment for past deeds, Athens had to send seven maidens and seven young men to Crete to be devoured by the Minotaur. The message, she said, was clear to her even as a child: “Mess with us and we’ll do something worse than kill you. We’ll kill your children.” But the story finally came to her with the experience of “channel surfing between reality TV programming and actual war coverage.”

Would I recommend it

Young adults will be riveted by Collins’ novel. The Hunger Games combines elements of an intense survival adventure with a story of friendship and love. The book has a powerful story sure to spark the interest of most. It has a good plot, and the concept is quite interesting but is held back by its short length which didn’t allow all its characters to truly blossom and show their potential. I would say 7/10 decent book for people aged 12-15.

An extremely powerful story of a young southern boy, from his late high school days through three years of college to his life in Harlem. His early training prepared him for a life of humility before white men, but through injustices- large and small, he came to realize that he was an “invisible man”. People saw in him only a reflection of their preconceived ideas of what he was, denied his individuality, and ultimately did not see him at all. This theme, which has implications far beyond the obvious racial parallel, is skillfully handled. The incidents of the story are wholly absorbing. The boy’s dismissal from college because of an innocent mistake, his shocked reaction to the anonymity of the North and to Harlem, his nightmare experiences on a one-day job in a paint factory and in the hospital, his lightning success as the Harlem leader of a communistic organization known as the Brotherhood, his involvement in black versus white and black versus black clashes and his disillusion and understanding of his invisibility- all climax naturally in scenes of violence and riot, followed by a retreat which is both literal and figurative. Parts of this experience may have been told before, but never with such freshness, intensity and power. This is Ellison’s first novel, but he has complete control of his story and his style.

Under the Hawthorn Tree

The book I’m reviewing is ‘Under the Hawthorn Tree’ by Marita Conlon-McKenna. In my opinion, this is a great book. I like the storyline of the book and find it very intriguing. It truly conveys the situation of the famine in Ireland and provides an immersive look into the desperate period of time. This novel makes me aware of the horrific events of the famine and the struggle people had in order to survive the disastrous famine. I find that the feelings of the children are conveyed accurately, and this makes the story much more realistic.

I like the idea that the three children, Eily, Michael and Peggy having to survive in desperate situations as they go on their long journey on their way to Castletaggart to find their great aunts. The events are well described, showing detailed information and scenes of what it must have been like for those living during the famine, therefore providing a realistic and immersive experience for the readers. Imagery is well used, describing the poor victims of the famine, all skin and bones starving to death miserably. This makes you imagine and picture the atmosphere of the scenes.

I find the part when Peggy has the fever well written. It is told accurately and the efforts of Eily and Michael to help their little sister are well shown. I must say that my favourite part of the novel is when they finally reach Castletaggart despite the horrible obstacles they had in reaching it. They finally arrive at their great aunts’ shop and I think that this is a great ending for this book.

Overall, I think this accurately portrays the Irish famine in the 1840’s and I’d recommend this to people as it’s an intriguing book. The teacher read this in our class in primary school. 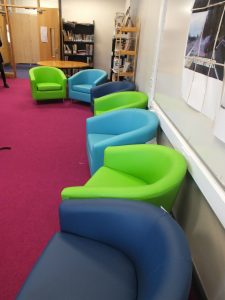 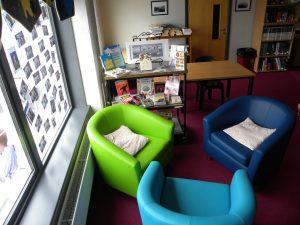 Mrs Shannon and her team put together displays that reflect current events  and celebrations as well as presenting collections of books that reflect a theme of interest to the students. Here are some examples… 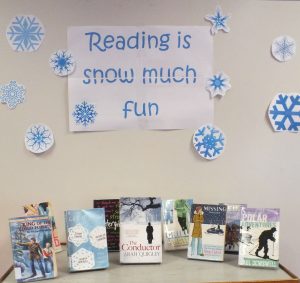 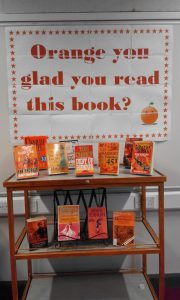 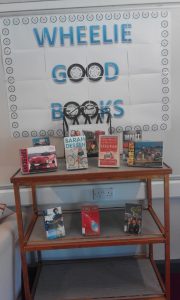 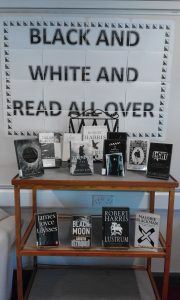 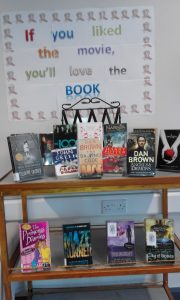 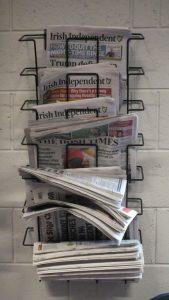 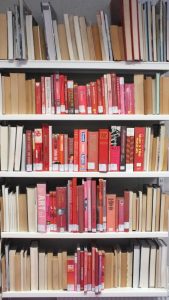 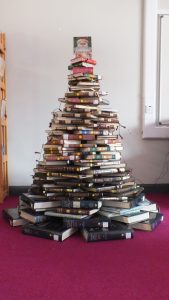 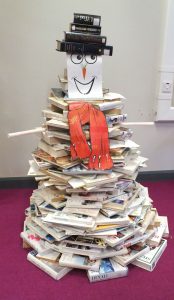 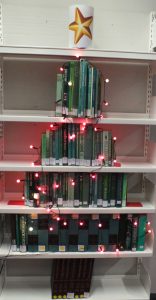 The Library Christmas Tree made of books is now almost a tradition in the Grammar School.