The school prides itself on the family atmosphere within it – There is a head of boarding, a boy’s housemaster and a girl’s housemistress who is also the matron. There is also a second matron and approximately 15 live in staff who do night duty. The head of boarding also lives on the campus. The teaching staff, alongside other duty staff, play an active role in running the boarding houses.

The canteen is located next to the boys house. This is where all meals are served. There are three meals a day breakfast, lunch and tea.  The boarders also enjoy scones and toast, tea and coffee at little break. 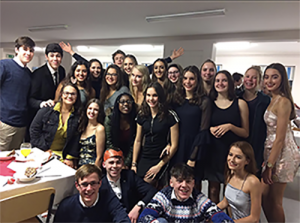 Every year SGS has international students and in 2018/19 we had International students in TY from Spain and Germany who came to SGS in the hope of improving their English. However that’s not all they gained from this year. A common theme that came up was that the students made great friends throughout the year, some of whom they plan on meeting again sometime in the future. Another running theme was an appreciation for boarding life where they felt they learned new skills through living with different people. They said that boarding gave them a sense of independence too. They enjoyed trips away with the school where they got to see other places in Ireland. Another highlight was playing new sports like hockey and rugby that previously the students did not have access to. School life here is very different from school in their own countries, so they are pleased that they got to encounter a different experience of school life – and improve their English, of course! Overall the students were very positive about their time in Ireland.

LIFE AS A BOARDER – THE THOUGHTS OF A FORMER BOARDER

“In my opinion life as a boarder is an irreplaceable experience. You spend 6 years away from your family, which can be tough in the beginning but the benefits outweigh the downsides of living away from home. You learn to be more independent and responsible. This all aids in the development of your personal attitudes to life. It makes the step of leaving home easier.

During the six years in the school, you make friendships that will withstand the test of time. It is like having one big extended family. If you have a problem there is always someone there to talk to.

Your own personal identity is developed as you learn how to live with different people from different backgrounds and ideas about life.

There is a relaxed and friendly atmosphere as everyone learns to accept the people around them.

Life as a boarder is an experience that I would never regret having as I have learnt so much and matured considerably in the few short years in the school. I would recommend it to anyone as the best learning experience for future life.

What we have learnt about how to deal with people will stand to us in the future.“

Here in Sligo Grammar we have the privilege of welcoming people from places outside Sligo whether it’s nationally or internationally. However a question that would be on a lot of peoples mind is what the difference is between being a boarder and being a day pupil – or if they are very similar. A survey was carried out with the Transition Year boarders. They were asked about their personal opinions of boarding and what they get up to each day.

When they were asked about their daily routine it was intriguing to hear that there was no significant difference in comparison to a typical student‘s day. Some of the students said.”We wake up, have our breakfast, get ready for school, go to first three classes, return to boarding house during break, go to next three classes, have lunch in canteen, go to last three classes.”

They then explained what they normally do after school. “We have some free time to go into town, return for dinner in thecanteen, more free time, prep (when student get time to their homework), relax for the rest of the evening and then go to bed.” When you look at this its clear that there isn’t much difference between the two walks of student life.

They were then asked about their own opinions of boarding. The first question was whether they preferred being a boarder or being a day pupil.  All the Transition Year that were asked favoured boarding. They then explained why they loved boarding so much – “Probably being with your friends all the time….we’re like family……it’s great fun and there’s always stuff to do.”

As you can see boarding is not that different from being at home. As a boarder it is hard to cope without your family. However even though you are away from your real family your friends in the boarding house act as your second family so when you feel lonely there is always someone there. So if you are ever worried about leaving home to go to school elsewhere don’t worry because the boarding house is like your second home.