Soccer is a relatively new sport in the school. The school has both boys and girls teams which compete locally with other schools. They are trained under the watchful eyes of our school very own two football coaches Mr. Mooney and Mr. Doherty and there is a growing interest in the sport in the school which hopefully leads to many achievements in soccer in this school. 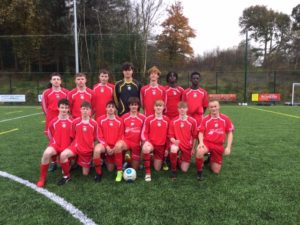 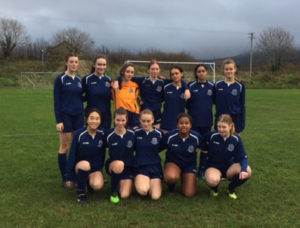 This year Sligo Grammar School fielded a girls soccer team. The girls took part in the Connacht B Cup, playing against St Clare’s Comprehensive School , Manorhamilton and St Patrick’s College, Lacken Cross. Unfortunately, they lost both matches but played very well, especially 1st years, Tara, Sophie, Saoirse and Mimi. Almost half this team was made up of two families – Lara and Sophie Swann and Saoirse, Meabh and Roisin Gillmor! Lara Swann also represented Connacht in the Irish Schools U15 Interprovincial soccer tourna- ment. Well done Lara!
The boys team also had a good year so far in their Connacht A Cup. They competed against teams including Claregalway College, St Geralds College, Castleber and Summerhill College. They were very unlucky not to come away with three wins, especially in the Claregalway match when the rival team scored in the final seconds. Luke Mavrack was the youngest player on the team at 14 years old. 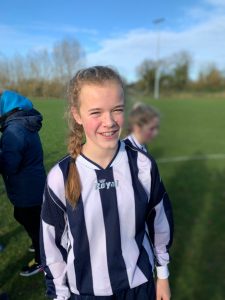 Third year student, Lara Swann, was chosen to represent Connacht at the Irish Interprovincial Soccer Tournament at the AUL Complex in Dublin last weekend. Connacht came third, beating Ulster into fourth place, with a 2-1 score line. They did very well, losing only by 0-1 to Leinster who were the eventual winners. Connacht came back from a 2 goal deficit to Munster but lost in the dying seconds on a goal from a free kick. Final score: 3-2. Lara had a really good tournament albeit playing out of position at left back.
It was a great achievement to be chosen for the squad and it was good to see her talent being recognised at Provincial level. Well done Lara!

With the retirement of Pat Doherty, the man, the myth, the legend, Mr Mooney, our beloved maths teacher and SGS sporting legend, has taken over the management and coaching of all teams. He is supported by assistant managers Caoilte Brannigan and Daniel O’Toole. The U17s Boys League got off to a strong start with one win and one draw. The U17s drew their first game at home with a stunning match where Joshua Mulrennin-Flynn scored a hat-trick. The score was 3-3 vs Boyle. The team had another game vs Enniscrone where they won the game 3-1. The goal scorers were Max Stafford, Luke Glennon and Sean Ndego. This U17 team has a strong chemistry and we hope they will bring home the bacon. They are due to play Grange and this game will decide whether or not the team qualifies for the Connacht Quarter Finals for the first time ever.

The Boys U17 Soccer Team got off to a mixed start to the season. They drew and lost their friendly games to Ballinode College and Strand Celtic FC. In their first competitive  game of the season the boys were unlucky to lose to Summerhill College 2-1. They have 2 more games left in the group stage. We are hoping the boys will qualify for the next stage.

Both the girls and boys team competed against Ballinode College in September. The girls team showed of their new found skills on the pitch and won 3 – 1 but sadly for the boys team it was not their day and so they lost 3 – 1 ironically but they gave a valiant effort.