Sligo Grammar School  has developed  basketball as an extra-curricular activity in the past few years.  Training is done after school in the school gym.  This is a great basketball facility and all home games are played here.

Basketball is a very popular sport in the school with students  from various year groups competing for the school.  There are U19 (Senior)and U16 (Junior) teams for boys. There are also second year and first year teams.   Girls are welcome to train but as yet there is not a sufficient number to form a team.

The basketball season got off to a great start for the U19s with the team winning its first two matches! The U19s won 53-51 against St. Mel’s College Longford and beat St. Colman’s College Claremorris 48-20.
They sadly lost to St. Brendan’s College Belmullet 59-52 despite their best efforts. Our basket- ball coach is Mr. Flores, who welcomes anyone who wishes to try basketball. The U16’s and U19’s train on Mondays and Fridays, while 1st and 2nd years train on Tuesdays. We wish all the teams the best of luck in all their upcoming matches and we know they will make us proud. 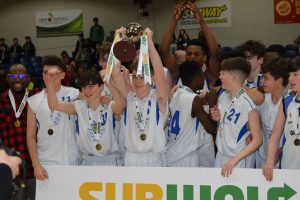 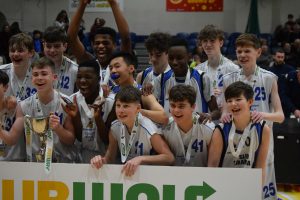 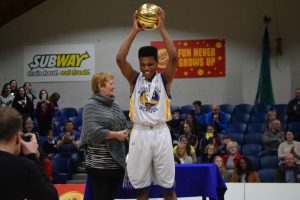 On Tuesday Jan. 23rd Sligo Grammar School emerged victorious in the U16 Basketball Schools All-Ireland Championship. They beat St. Munchin’s, Limerick in an exciting match at the National Arena in Dublin. Coached by Anthony Flores, the SGS team put in a terrific performance, winning 50 – 43. Divine Akude was awarded  MVP (Most Valuable Player) for the match. The team was captained by Mark McGlynn and everyone played a blinder!! They were well supported by a bus-load of their classmates. Huge thanks to all who came to cheer them on and especially to Coach Anthony Flores for his hard work and dedication.

Basketball Teams have enjoyed a very successful first trem, not least the U16s who won the Semi-Final of the Hula Hoops Schools Boys 16 C Basketball Cup. 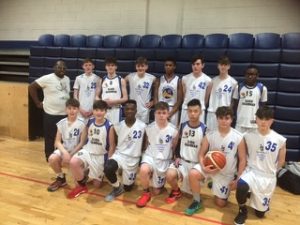 Here is a report on their win by their coach, Anthony Flores

In what was an exciting game of underage hoops. Sligo Grammar opened up the tally with a score from Mark McGlynn straight for the tip. It was followed by a free throw and lay-up by Divine Akude. For the next 5 minutes each team was getting rid of its’ nerves turning the ball over continuously. St Joseph’s started to break down our defense with good drives and finishes and they were up 11-5 for most of the first quarter but we finally brought it back to 11-8.

Sligo Grammar looked exceptionally strong in the second quarter with all of the scoring coming from Mark McGlynn and Divine Akude with a tally of 10 points between them. The defense was stepped up by the whole team, and St. Joseph’s only managed 2 scores for the quarter with a score of 18-15 to end the first half.

In the 3rd quarter both teams battled back and forth and neither would give an inch. Although St. Joseph’s best player went to the bench with 3 fouls the team managed to hit a 3 and a couple of layups to give them a short lived lead which was erased by the scoring prowess of Divine Akude who gave St. Joseph’s a lot of trouble inside the paint with his athleticism. SGS player Mark McGlynn’s attack proved an asset to the team as he finished up the quarter with a score. Both teams finished the quarter with 11 points apiece. With the score at the end of the quarter being 29-26 in favour of Sligo Grammar School.

The fourth quarter was more of the same but other members of the team contributed to the scoreline. Some clutch scores from Bridel Bosakani and Josh Henry supplemented the scores with great shooting and attacking. It was a back and forth affair which resulting in fouls for both teams with only 5 minutes to go in the game. But supporters from the Grammar and from Colaiste Choilimcille Ballyshannon ( Mark McGlynn’s hometown) gave the boys that lift they needed to secure the win 44-46. In the last 53 seconds Josh Henry stepped up with 4 free throws that helped seal the game helped along with a big block in the last 7 seconds by Divine Akude. Scorers Divine Akude 28, Mark McGlynn 14, Josh Henry 8 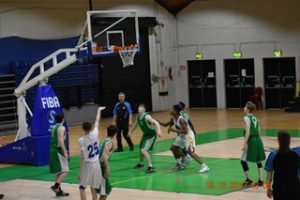 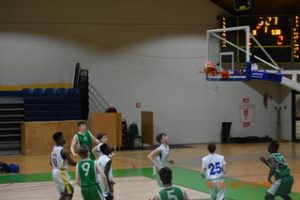 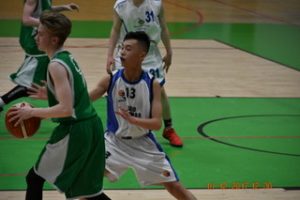 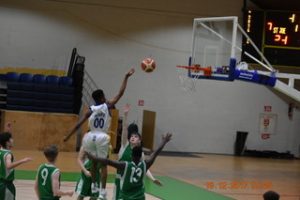 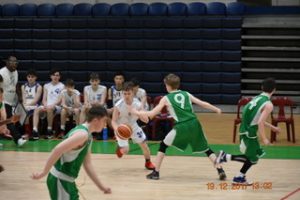 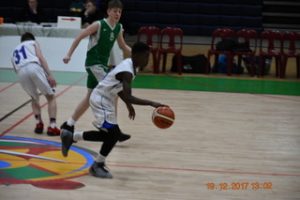 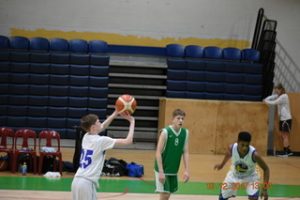 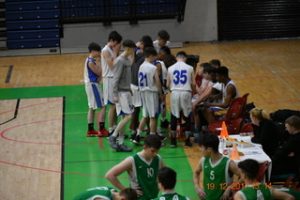 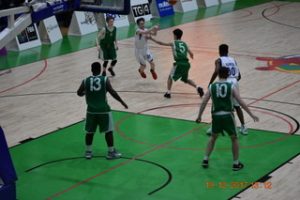 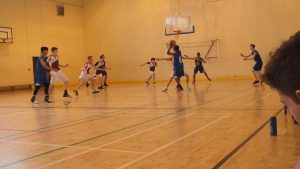 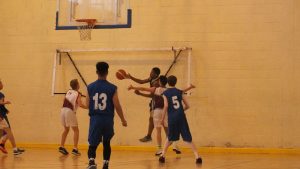 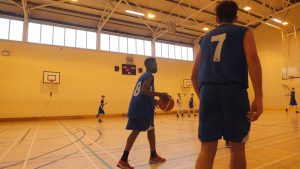 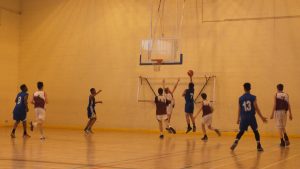 The Senior Boys Team had a great season with 5 games won and only 1 lost. They were unlucky to lose their first game but then went on to win the next 4 games in their regional group. Unfortunately, after such a successful run, they suffered a loss in the semi-finals
of the regional championship against Rosses Community School.

The following are the results from the season:

The Junior basketball team started off very well this season.They won every game in their regional group. They then lost in the final match of the regional finals. However, due to two teams from each region being allowed to go through, SGS Juniors made it to the All-Ireland Championships. Unfortunately they were knocked out in the playoffs.

The second year basketball team won all their matches up until their final against St Geralds with a narrow loss of 5 points.

The Under 16 Sligo Grammar School basketball team has had a very successful term. The results from this term are listed below:

Unfortunately, after such a successful run, the Under 16s lost the Semi-final to St Joseph’s College Belmullet.