Rowing is a relatively new sport to SGS but has taken off well.  Students train hard both on the school’s rowing machines and on the river thanks to the generosity of Sligo Rowing Club who allows the school use their boats.

The members of the club train on the rowing machines in the school and in Autumn and Spring/Summer get the opportunity to row on the Garavogue River.

Despite being on summer holidays, members of SGS Rowing Club continue to train under the watchful eye of our coach, Ronan Ivers. Ruth Beirne, Finn Reid, Conn Reid and Fiachra Dowd are just four of our rowers who venture out on the Garavogue at weekends to train with the Sligo Rowing Club. The SGS Rowing Club is open to all students, no matter what class you are in. Getting out on the river, even in the dead of winter, is a great way to take a moment to enjoy nature and a bit of peacefulness! Not to mention a great work-out! As ever, we are very grateful to Sligo Rowing Club for allowing us to use their boats. Keep an eye on the Extra-Curricular timetable at the end of August to see when the SGS Rowing Club will be meeting for 2021 – 2022.

The school Rowing Club is up and running for 2020. Last week the students trained on the rowing machines in the school, where their coach, Ronan Ivers, concentrated on rowing technique. This week the students got the opportunity to put their new-found skills to the test on the Garavogue River. With the help of two of the teaching staff and Ray Murtagh of Sligo Rowing Club, Coach Ivers organised an afternoon’s rowing in boats owned by SRC. The afternoon was warm and the river calm and the club rowed from Doorly Park to Ardaghowen, within sight of SGS, then back towards Lough Gill. The session ended with a race between the two crews from Hazelwood House back to Doorly Park. The students, particularly the new members, many of them 1st years, enjoyed their time on the river where they also met their fellow SGS students who were out in the kayaks! The SGS Rowing Club meets in the school “Old Gym” on Friday afternoons and rowing on the river will be organised throughout the year, thanks to the generosity of Sligo Rowing Club. Anyone interested in joining, just come along to the Old Gym after school on Fridays. 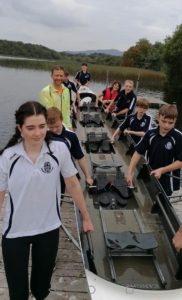 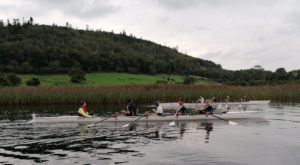 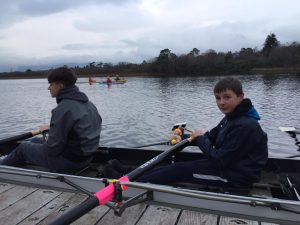 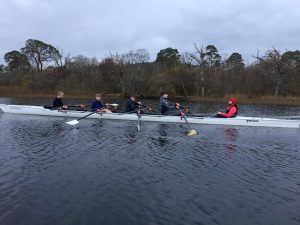 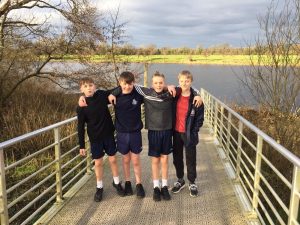 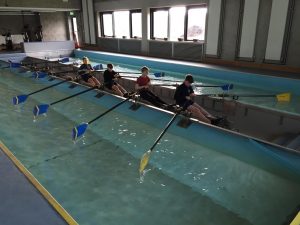 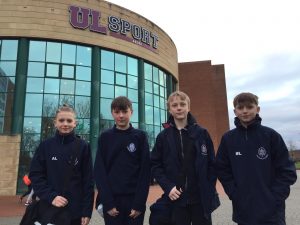 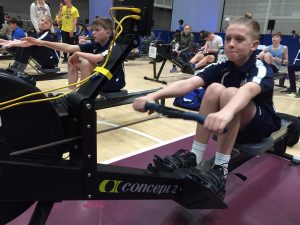 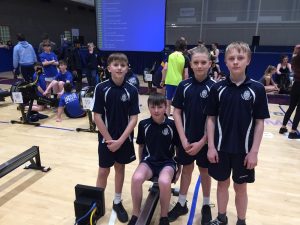 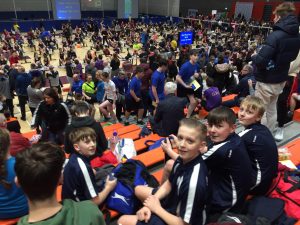 On Wednesday 16th October a team of rowers from Sligo Grammar School competed in the Inaugural Sligo Indoor Rowing Blitz which took place in the Sligo Tennis Club. This new competition, organised by the Sligo Sports and Recreation Partnership, was the perfect way for the new members of SGS Rowing Club to cut their rowing teeth! The main competition came from Summerhill College and in the initial competition our rowers came third behind two Summerhill College crews. However in the second competition we pulled ahead of one of their crews, finishing second. Not a bad days work for our new rowers! 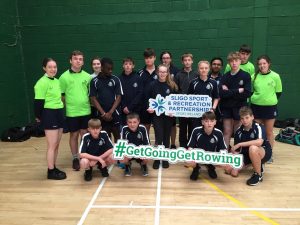 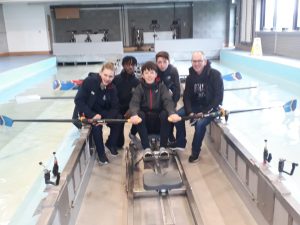 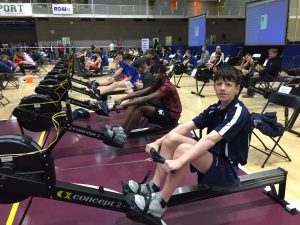 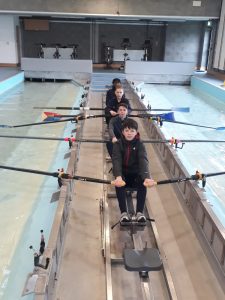 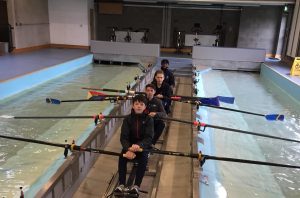 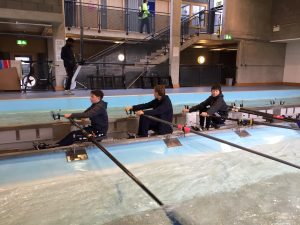 In the early hours of Saturday morning, Jan 19th, SGS Rowing Club made the journey to the University of Limerick for the 2019 Irish Indoor Rowing Championships. The school entered 4 students in the individual events and also entered the crew of Cameron Kilcoyne, Philip Ofodile, Matthew Ryan and Gareth McGinty for the team event.
The results on the day were very encouraging with everyone finishing mid table or better. Philip Ofodile did particularly well in the 500m race where he finished 22nd out of an entry of 90 boys. The highlight of the day was the 2,000m team event where SGS battled throughout to finish 4th in their heat and 7th overall out of an entry of 18 schools.
The Club is extremely grateful to Fintan Ryan and all the parents who helped with the preparation and logistics on the day, and thanks to Ronan Ivers who comes in to train the team every week. The club is open to all students and anyone who is interested in giving rowing a go is welcome to come along to the Old Gym on Tuesdays and Thursdays after school. 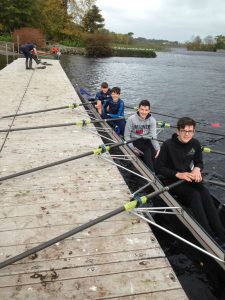 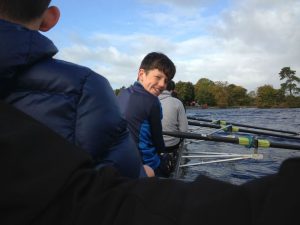 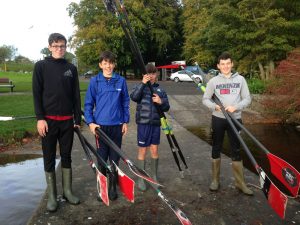 Rowing has been going well this year with students training hard both on the school’s rowing machines and on the river thanks to the generosity of Sligo Rowing Club who allows the school use their boats. 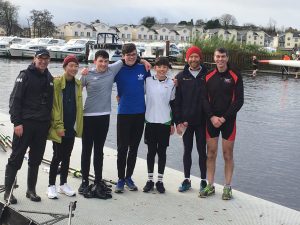 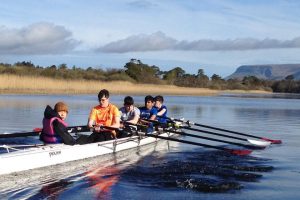 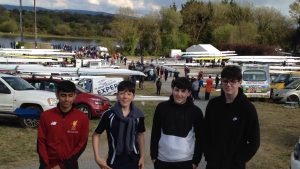 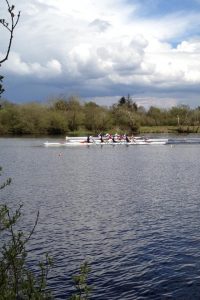 Well done to David Barlow, Joshua Hanna, Ammar Zaman and Matthew Ryan, who represented Sligo Grammar School at the Irish Schools Regatta in Limerick on Sunday 29th April. The team performed very well, finishing third. It was a close fought race but in the end the win went to Blackrock College, Dublin and second place went to An Phiarsaigh, Cork. SGS finished a length behind, claiming third prize. What a fantastic achievement for our School! Well rowed, boys!! 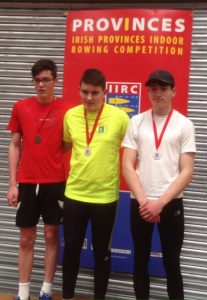 On Saturday the 25th November 2017, one of the coldest days of the year, SGS Rowing Club hit the road for Limerick to compete in their first ever competition. Fortunately this was an indoor event! The University of Limerick Arena was the location for the Irish Provinces Indoor Rowing Championships. The annual event consists of individuals and teams racing a set time or distance on the rowing machine in a variety of categories and age groups. The event is in its fourth year, and with over 1,000 rowers entered, it certainly has grown from strength to strength. SGSRC entered three boys at Junior 13 (J13) and two boys at Junior 14 (J14) level. The five boys then came together to race in a team event. The first race of the day was the J13 500-meter sprint race with 42 rowers entered. SGS had three representatives, Matthew Ryan, Ambrose Bamber and Kyul Chan. All three joined the rowing club in September and this was their first race. Pre-race nerves were widespread and evidenced by a false start, meaning that the organisers had to reset the starters orders! But thankfully, on the second attempt the race got off to a clean start. Matthew put in a strong performance with a finishing time of 1 min 55 secs, which placed him at the top end of the table – 13th out of 42 rowers. We also had a very credible performance from Ambrose Bamber, who finished in the top half of the table with a time of 2 mins. Ambrose was racing in a grade above his age so will be able to race the same category again next year, which suggests he could do extremely well at that stage. Kyul Chan finished close to the mid table also, in a time of 2 min 7 secs. This was an excellent performance as he set a new personal best (PB) time in the competition. Next up were David Barlow and Joshua Hanna in the J14 500-meter sprint. There were 36 rowers racing this event and Joshua put in a good race to finish mid table in a time of 1 min 48 secs. However, the outstanding performance of the day was David Barlow’s time of 1 min 33.8 secs to cover the 500 meters. This was an incredible effort and a new PB for David, and earned him the Silver medal for the event. The winning time was by Ciaran O’Connell of Waterville Rowing Club who finished in a time of 1 minute 33.2 secs – only a half a second faster! While David came away delighted with his performance, he will, no doubt, be hungry for revenge the next time these two rowers meet again. In the final event of the day, the SGS boys were entered as a team. However, as the category was well above their age group, it was established before the race that they were unlikely to be strong medal contenders. In saying that, they raced very well as a team and, as hoped, gained valuable experience for future events. The club is very grateful to Mr. Chan who helped with transport to the event and for his support throughout the day. 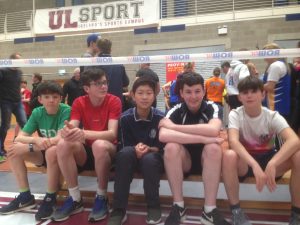 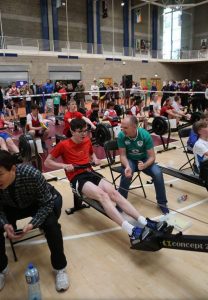 Next race for the rowing club is the Head of the Shannon regatta taking place in Carrick-on-Shannon on Saturday the 2nd December. Racing takes place at 11am and 2pm. Spectators are invited to watch the action from the jetty opposite the Landmark Hotel.