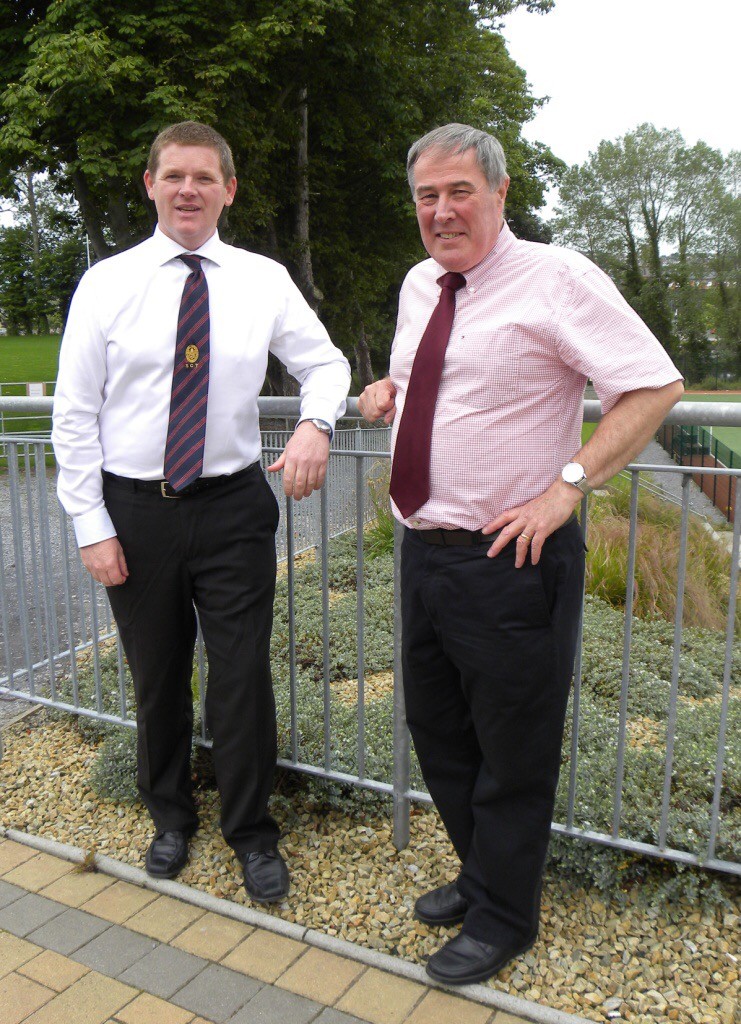 After more than 40 years in the school, the out-going D.P., Mr. Arnie Griffin, is embarking on a well-deserved retirement. He will hand over the reins to Mr. Jimmy Staunton on 1st September next.
Mr Griffin came to Sligo Grammar School in 1974 as history teacher, but in his years in the school he also taught Geography, Civics and First Aid as well as being the main figure behind the School Scout Troop and The School’s Broken Weir Kayaking Club.In 2009 Mr Griffin took over as Deputy Principal and dedicated himself to the post until this year. Mr Griffin was an energetic and savvy Deputy Principal, his ear always very firmly to the ground when it came to knowing what was going on in the school!

His dedication and loyalty to the school was apparent to all,as was his passion for his subject, History.

When asked why Sligo Grammar School was special to him, Mr Griffin had this to say; “It was a friendly school when I came in 1974 and it still is after all these years” He added that this friendly atmosphere was due, he believed, to the good relationship between students and teachers. He recalled a comment once from a new teacher who was puzzled at students greeting him in the corridor!

Mr Griffin has also fond memories of his years with the schools canoeing/kayaking club. He was there at the establishment of the club and has seen it go from strength to strength since. It is now one of the most popular extra-curricular clubs in the school and participates successfully in competitions around the country every year.
A popular figure in the life of the school, Mr. Griffin will certainly be missed.

Mr Staunton came to Sligo Grammar School in 1992, as geography teacher. In the years since then he has helped to build up an excellent geography department within the school. At one time he also taught maths through to Leaving Cert. level. In 2007 Mr Staunton was appointed Senior School Co-ordinator with overall responsibility for the academic and pastoral welfare of senior students. He completed a post-graduate qualification in Educational Leadership in NUI Maynooth in 2011.

In recent years Mr Staunton has been inextricably linked with the school rugby teams, both junior and senior, and has been involved in bringing teams to victory in the Connacht Schools Cup competitions. His involvement in rugby is a very important part of life for him and he won’t be giving that up in the near future!
As well as his work in the school,Mr Staunton has vast knowledge of educational policy and practice, gleaned from his involvement with the Education Committee of the ASTI, acting as chairman of the Committee for 4 years. He was also involved with the NCCA in the development of the new Geography course which was examined for the first time in 2008. Mr. Staunton also chaired a review of the Junior Cert in 2007for the NCCA. This involvement in the development of educational policy provides an insight into education in Ireland which is a great asset to Sligo Grammar School as it looks to the future.
As well as genuine enthusiasm for the job, Jimmy Staunton brings a lot of experience and expertise to the post of Deputy Principal and we wish him all the best in the Trojan task he is about to embark on.
Asked if he had any words of wisdom for the incoming Deputy Head, Arnie Griffin had this to say; “Nothing is black-and-white; everything’s grey”. Take note, Jimmy, and good luck!