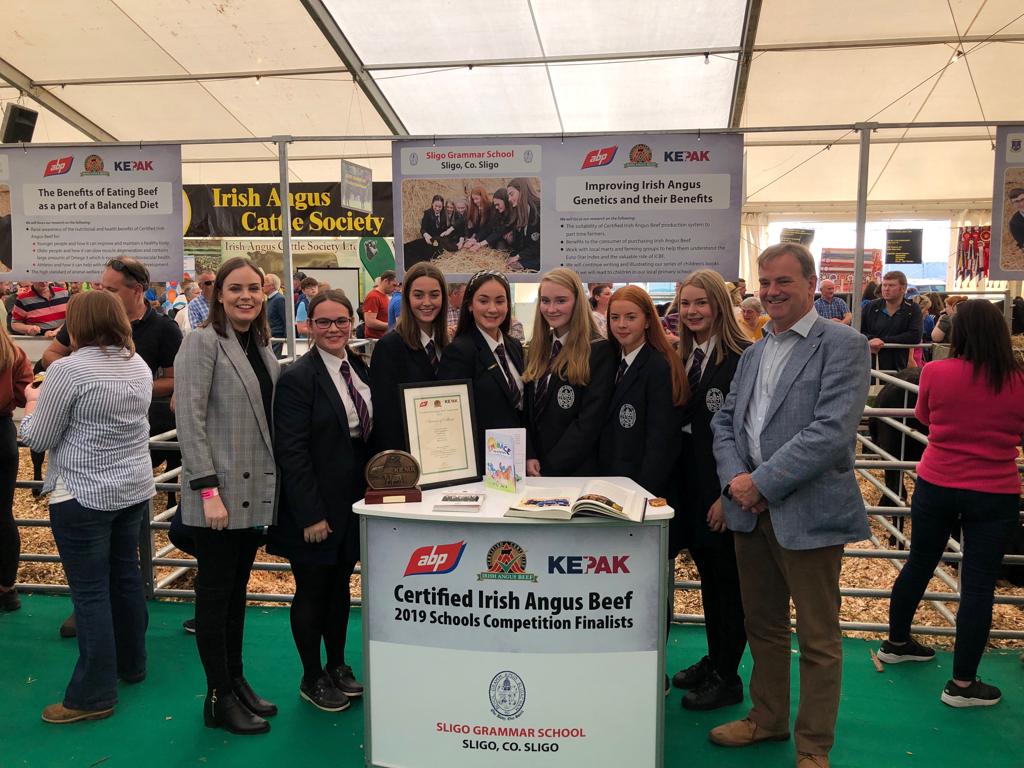 During the week of 16th September the, now 5th year, girls who won through to the finals of the Irish Angus Beef competition attended the Ploughing Championships in Carlow. Each day the girls were on site at the ploughing from 7:30am and they were at their stand daily from 9am  until 5pm. Each day the group were interviewed 3 times (10am, 12pm and 3pm) by Michael Flanagan, Director of The Irish Angus producer group. They were asked their reasons for entering the competition, how it’s going so far for them and the theme of their project, which is ‘Improving Irish Angus Genetics and its Benefits’. The girls had to outline their promotion ideas for the next 18 months which includes the promotion of their book.  This book called, ‘Embrace – Day on the Farm’,  is illustrated by Sarah Cunningham. The book is aimed at primary school children and the girls hope to put together another book in the near future. On Tuesday the girls did an interview with Suzanne Campbell for Mary Wilson’s Drivetime on RTE Radio 1 which was aired on Wednesday evening. They also had the opportunity to speak with the general pubic, farmers and school students of their own age about their project. The girls are featured on page 288 of Dovea genetics book ‘Landlord to Genetics’ which was published earlier this year. (only school to be featured! This is a great achievement in the farming world!!!!!) On Wednesday  the girls were involved in a group interview with ‘Thatsfarming.com’ which currently has nearly 3000 views on its Facebook page. On Wednesday Emma O’Gorman also did an interview with Agriland which will be posted on Youtube soon.  On Wednesday Miriam O’Callaghan presented the girls with their 5 calves in an award ceremony held at 1pm, attended by Mr Hall. The girls had yet another interview on Thursday, this time for the Farmers Journal social media. It was also great to see the Sligo Grammar School Agricultural Science students who came to visit the girls on Thursday. Finally, on Friday, the 5 calves arrived to Rebecca’s farm in Templeboy. All the girls and Miss Higgins visited the farm on Friday evening to welcome them. Now begins two years of raising and looking after the calves! The girls would like to thank Miss Higgins for her support and guidance in the competition, Jonathan Harte for looking after the calves, their families for visiting them over the three days, the school and  Jimmy Waters for all their support over the competition. See some photos HERE.