Theatre and Drama are well represented in Sligo Grammar School.  On Thursday afternoon Ms Delahunty runs a Drama Club for all year groups. 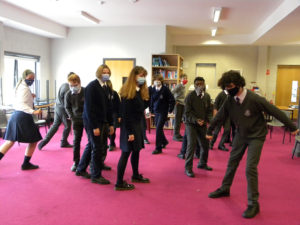 Both Junior and Senior students go to see plays that are on their English course. Sometimes this means travelling to Dublin or Castlebar to see live streaming of plays from London. 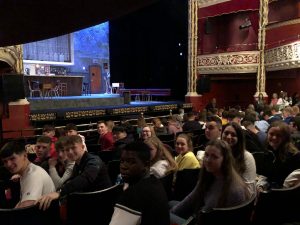 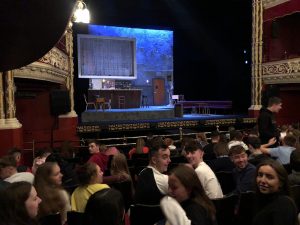 Sligo Grammar School has been producing school shows for many years.  Until 2009 the school produced full length plays in the main.  These included She Stoops to Conquer, The Real Inspector Hound, The Matchmaker, Arsenic and old Lace, The Diary of Adrian mole, Pride and Prejudice, Sganarelle….the list goes on! However for the last number of years we have been producing musicals.  This is an opportunity for 4th and 5th year students to take to the boards and one not to be missed. We forget all the English, Irish and maths we learn but the school show lives on forever!!! 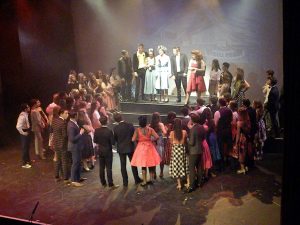 Friday 29th November 2019 saw the final night of the SGS school musical, “Grease!”. Fifth year and TY students got their chance to shine on the Hawks Well stage.  The show had a very successful run, packing out the Hawks Well Theatre for 4 nights. Well done to all the students who took part, both on stage and behind the scenes. Thanks to all the people who made the show possible, staff and students. Photos are HERE

AWARD NOMINATIONS
Congratulations to the the cast and crew of the school musical 2019/2020 who were nominated for four awards in the Stagewise National Awards 2020. In this new schools drama competition SGS received 4 nominations for “Grease”. In total there were 72 schools adjudicated in the competition. The SGS nominations were:
Best Set: Emily Tansey and Padraig Geraghty
Best Female Singer: Zoe Alexander
Best Ensemble Scene: “Greased Lightning”
Best choreography: Emily Tansey and Michelle FeeneyWell done all!! 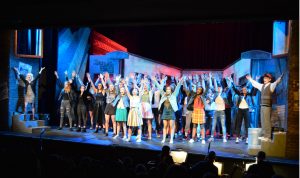 2017/18 saw the production of the much-loved musical Little Shop of Horrors. Friday 2nd February saw the final performance of the school musical.  After some very intense weeks of rehearsal the TY and 5th year students finally got to tread boards of the Hawk’s Well Theatre on Tuesday 30th January. The show was a very polished and accomplished one, with every cast member giving it their all. The school musical happens once every two years with 5th and TY students taking part. The school sees the musical as a very important part of the broader education of our students. From the lead actors to the chorus members to the fantastic backstage crew, every talent is catered for. Even backstage, during the show, there is no teacher involved – it is all run by the students themselves. You can’t teach these skills, they must be learnt by experience, and that is what we give our students. Huge thanks go to the teachers who selflessly gave their time and talents to the enterprise, whether in the months leading up to the show  or  in the week of the show itself.  Pictures from Little Shop of Horrors can be seen on the school Facebook page and  HERE

The previous musical was ‘Hairspray!’ and was performed in the school gym on November 25th – 27th 2015. It was a massive success due in no small part to the absolute dedication and hard work of the students. As ever the students were responsible for all aspects of the production from designing the programme to stage-managing the show. Thanks to the teachers who worked so hard to make it a success, whether it was playing music or selling tickets. It was a group effort and couldn’t have been done without you all.

Here is a slideshow of some of the photos taken. You can see more on our Facebook page.

2011’s musical, was the school’s production of Calamity Jane. Fourth and Fifth year students took to the Hawk’s Well Theatre stage on the the 22nd to the 25th of November 2011, and presented a fabulous show.  Have a look at this short slideshow.

Our very first musical was West Side Story, and here are some photos from that show. 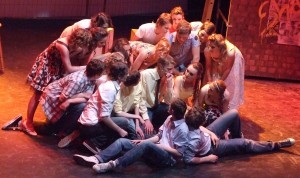 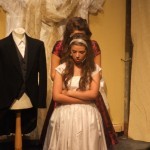 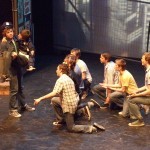