Well done to SGS DebSoc member, Alfie Barron from TY,  who won the Regional section of the Europe Direct Soapbox Public Speaking competition. The competition is held annually and this year, thanks to Covid-19, it was a virtual competition. Ellen O’Hara,2nd year and  Dara Kilcommons, 3rd year, also competed against other secondary school students from Sligo town and county. The topic for discussion was “Lies, damned lies and statistics – Establishing the truth is impossible in today’s world of misinformation, disinformation and propaganda”. Alfie won an i-pad and went on to represent the region in the  National Finals on Thursday December 9th. The final was a virtual event and Alfie was placed second overall. A fantastic achievement! 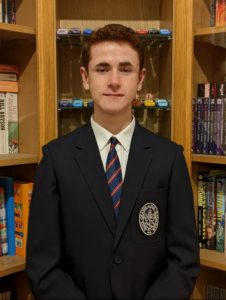 The SGS DebSoc year started off with on-line trials for the Irish World Schools Debating Team (Team Ireland). Four of our Senior and TY students went forward to compete on Saturday September 18th. Anushka, Pathak, Cameron Kilcyone, Alfie Barron and Ciara Ryan all went on-line to debate with students all around the country for a place on Team Ireland. All debated fiercely on the motions This House Believes that governments should never rescue failing private industry and This House would ban mixed martial arts.  Alfie Barron made it to the finals of the contest, debating the motion This House supports gender quotas in National parliaments.  Unfortunately he didn’t succeed in getting a place on Team Ireland. Next year, Alfie! 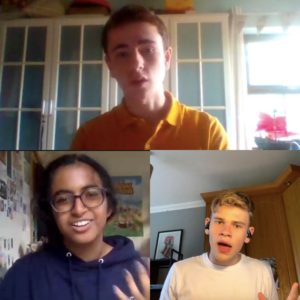 SGS DebSoc up and running again! 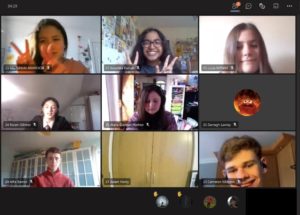 Extra-curricular sports have to wait for the end of the month before they get the all-clear, but already today – first day back – our debating society, SGS DebSoc has had a virtual meeting. After a warm-up word game the club members broke into two teams and prepared a debate for next week. The motion: “THB Internet trolls should b e held accountable for their actions”. Students were delighted to be back to SGS DebSoc and It promises to be a good debate next week. Well done all debaters for getting back to it so soon and thanks Ms. Hall for making it possible!

Despite Lockdown two of our Debaters, Anushka Pathak and Mia Sawai-Brandon took part in an all-Ireland Debating competition and workshop run by the “Hist” (Historical Society) Trinity College, Dublin. The competition, for girls from TY, 5th and 6th year, was held on Saturday 27th March via Zoom. The day started with a workshop, where participants were introduced to the British Parliamentary debating format and then the teams debated three different motions. These included “This House Believes that traditional school subjects are still the best subjects for educating the youth of contemporary society” and “This House Prefers environmental optimism over environmental pessimism”.

After a full day of debating, the Finals were held. Unfortunately our girls did not make it to the Finals but the whole experience was very positive. Well done to them for taking part – especially during their Easter holidays! Thanks to Miss Hall for organising it and for her support on the day. 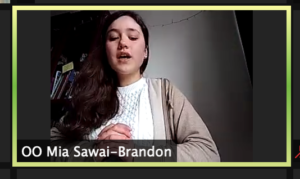 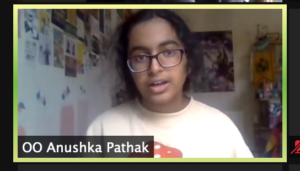 The Sligo Grammar School Debating Society is going strong again this year. With members from all year groups, the young debaters are busy thrashing out topical issues every Monday for an hour after school. The venue for 2020-2021 is the school library. This year Ms Hynes has stepped down as teacher-in-charge and has passed the baton to Ms Zoe Hall who would like to encourage any student who is interested in trying their hand at debating to come along. The first competition of the year is the EDIC Soapbox Public Speaking Competition. It will be held at social distance and recorded (for broadcast on EDIC social platforms) in The Model Arts Centre on 22nd October. The topic is “Everyone wants to go back to the pre-Covid way of life”. Speakers can speak for or against the topic. The SGS debaters always enjoy this competition and we wish them all the best again this year! Unfortunately Covid19 will prevent our usual Lunchtime Debates from taking place but nevertheless we wish all the SGS DebSoc members a great debating year! 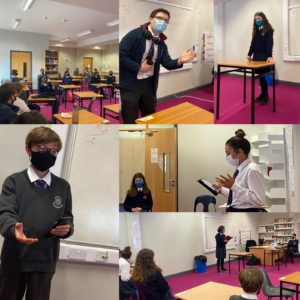 NATIONAL WINNER!
We are thrilled to announce that 5th year student Tara McLaughlin is one of the two National winners in the National Final of the ActionAid Speechwriting Competition. Tara and fellow 5th year student Genevieve Cox reached the finals of the competition which were held on 2nd June, via Zoom. Both girls delivered excellent speeches about the importance of the empowerment of women in the context of Climate Change and Global justice. Tara will be travelling to Sweden to meet with representatives from organisations working on Environmental issues and visit ActionAid in Stockholm to see their work in Sweden whenever the present situation with regard to Covid19 is resolved.
Well done Tara and Genevieve! 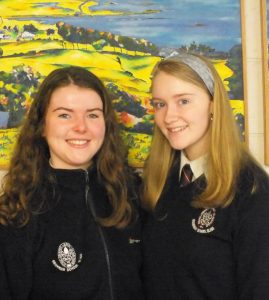 In TY all students get to learn the skills of debating and public speaking in a seven week module. 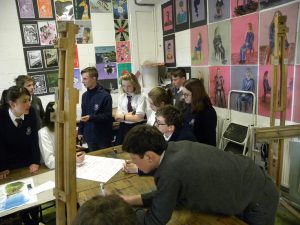 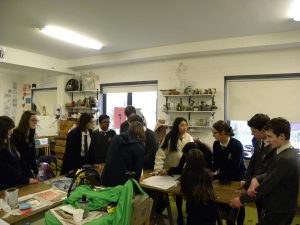 Above: DebSoc members 2019 – 2020 busily putting argument together for the motion “THW Arm the GardaI” 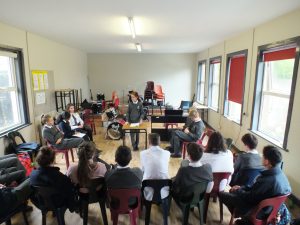 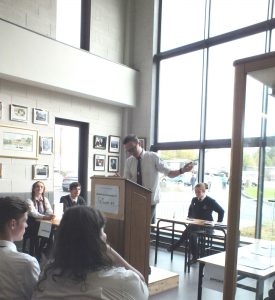 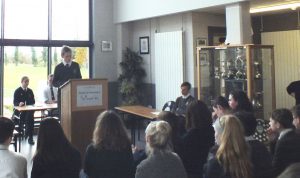 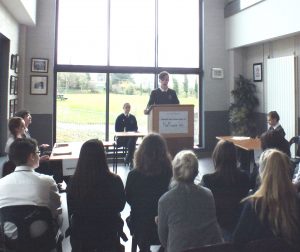 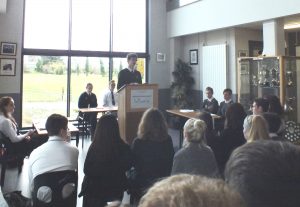 ROTARY YLDC WINNER 2018/2019
Well done to 6th yr. Juno Ellison who was one of three students to win the regional Youth Leadership Development Competition. An all-expenses-paid trip to Europe is her prize! Juno will visit Stormont and the Dáil where she will meet with politicians and business leaders, and then she will travel to Strasbourg where she will debate a variety of motions in the European Parliament. Juno had to do two interviews where she discussed her achievements in leadership and planning and organisation as well as her work experience and personal achievements. Juno’s active Transition Year and her involvement in school activities paid off in this as did her successes in debating. For the interviews she also had to demonstrate a good knowledge and critical understanding of social, environmental and political issues in Europe and Ireland. a well deserved win, Juno! Pictured with Juno are Máire Hynes, teacher, and Pat McNulty and Arnie Griffin of Rotary, Sligo. Arnie is also a past teacher of History at SGS! 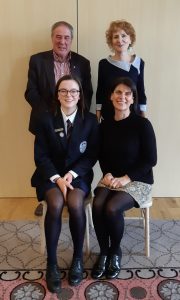 Well done to all our competitors this year and especially first Year Alfie Barron who came second in the U18 competition. 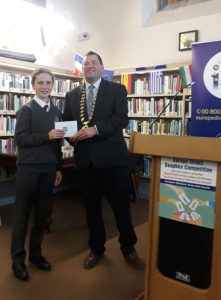 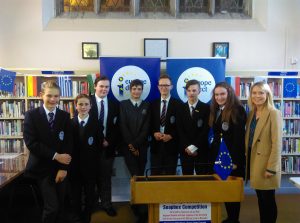 The competitions we enter include:

This competition is a Mace/Parliamentary-style debating competition and requires a very different set of debating skills. It is run by NUIG who organise workshops as well as the debates themselves.  The students find this kind of debating very exciting. Teams are generally taken from TY and 5th year

A new competition was inaugurated in 2017.  The local Europe Direct office organise a debate for local schools . It is sponsored by the Sligo County Council and is held in the Council chamber during the final term.

Sligo Grammar School has had great success in the Soapbox Public Speaking Competition. We have had National Finalists from the school for the past three years.This competition is run by Europe Direct and each competitor had to deliver a three-minute speech on a specific topic.

The SGS DebSoc had a very successful term. A lot of 1st and 2nd year students joined and are enjoying the weekly activities. Ms Aoife Finnerty has joined Ms Hynes in running the society which meets on alternate Tuesdays and Wednesdays. The term started with a trip to NUIG for a Debating Day. A group of about 15 students went to Galway and did workshops in debating skills followed by debating competitions. Robyn Scott and Caoilte Brannigan emerged as winners that day. Genvieve Cox continued the SGS tradition when she won the regional Soapbox Public Speaking competition and went on to represent the region at the National Finals in Dublin. The runner-up in the regional competition was Aidan O’Reilly. For the first time in a number of years SGS debaters are involved in the prestigious Concern Debates competition. A team of four 5th year students, ably assisted by their researchers, have won 4 out of 4 debates in the league phase of the competition. This fantastic record should see us into the second phase of the Concern Debates. A group of three TY students gave up a weekend to do a residential debating workshop in Galway in November. This was funded by the EU and aimed to develop discussion and debating skills in a Mock European Parliament scenario. The New Year will see moore opportunities for our debaters and anyone who wishes to join the SGS DebSoc is more than welcome! 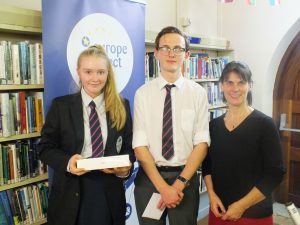 This year our team of Russell Nairn and Niamh Kilroy  got through to the Finals of the West of Ireland Schools Debating competition but could not attend the final – which was held in SGS – because of their mock exams. Bad timing! 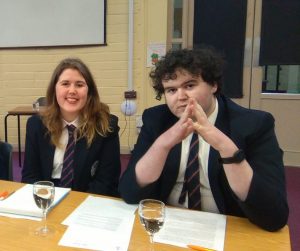 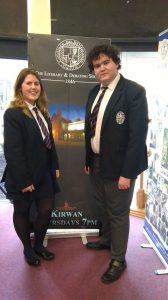 Russell also qualified for the National Trials  of the Team Ireland Debating Team. Unfortunately he did not get onto the National team, but we were very proud of his achievement.

Our TY team along with some Seniors went along to Galway to compete in the Cambridge Schools Debating competition. The debates were very exciting and our new debaters did very well, though did not emerge as winners. 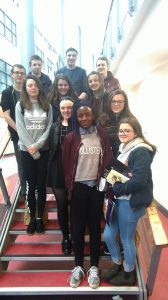 Our team of TY students argued a very difficult motion valiantly but did not win the judges over, emerging as runners-up. The motion was “This House Believes that Volunteering does make a difference” and we were arguing against it – particularly difficult as Sligo is European Volunteering Capital for 2017!

Hopefully this is only the first of many Europe Direct Debates 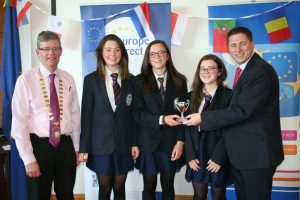 Last year Jude Perry was the Regional representative at the National Finals at the National Concert Hall. In previous years Russell Nairn and Rowan Kelleher were the National Finalists from the region. This competition is run by Europe Direct and each competitor had to deliver a three-minute speech on a specific topic. 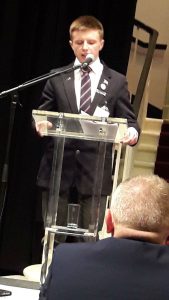